PSC has supported the Advanced Mixed Waste Treatment Project (AMWTP) in Idaho for almost ten years. During this time we have designed and built several NDA systems that are used on a daily basis for nuclear criticality safety, process control, and waste characterization. We also provide a team of highly trained and experienced NDA professionals who are responsible for all aspects of the NDA program at the AMWTP. This team includes an NDA Subject Matter Expert (SME), and four NDA Expert Analysts. PSC’s on-site team is also responsible for maintaining the WIPP certification of the NDA program, together with the analysis and review of all NDA data that is generated on a 24 hours per day, 7 days per week schedule.

At AMWTP, PSC has a proven track record for solving challenging waste characterization problems including assay of sludge, soil, high activity waste, depleted and enriched uranium, heat source and weapons grade plutonium, fission products, activation products, transuranics and other exotic nuclides. To date, more than 100,000 drums and 5,000 boxes have been measured under the supervision of PSC’s staff at AMWTP.

PSC’s team of NDA professionals have developed innovative characterization techniques that have been applied within both the TRU and LLW programs. These include techniques for the characterization of several thousand cubic meters of LLW for disposal at Nevada Test Site (NTS) and at the Energy Solutions facility in Clive, Utah. Characterization has been performed on hundreds of lead lined drums for identification of remote handled waste, and screening level classification of containers using historical data and field NDA measurements. PSC has also developed an elegant approach for characterizing waste on the TRU/LLW borderline and waste which falls below the Minimum Detectable Activity (MDA) of the system on which it was measured.

PSC’s long and successful history at the AMWTP has significantly contributed to the WIPP’s waste inventory. When combined with our contributions at Rocky Flats and our support of the Central Characterization Project (CCP) PSC estimates that it has participated in the assay of over 75% of all the waste that is currently disposed at WIPP. 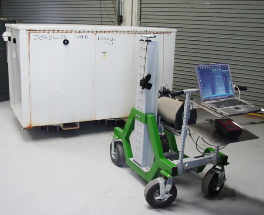 PSC utilizes portable far-field High Resolution Gamma Spectroscopy, High Purity Germanium (HRGS, HPGe) assay systems at LANL to characterize a wide variety of items including drums, boxes, cans, bottles, HEPA filters and glove boxes. A wide range and sometimes exotic range of radionuclides are encountered routinely from the measured items at LANL, including, but not limited to Pu238, Pu239, Pu240, Pu241,Am241, Am243, Cf249, Cm243, Eu152, U235 and U238.

The assay systems are mounted routinely on PSC’s TechniCARTTM mobile detector deployment platforms. These versatile platforms enable the detectors to be mounted at a variety of heights and angles and moved over a variety of terrain.

Since 2005, PSC has assisted in the successful measurement of thousands of items and continues to be part of the gamma spectroscopy group. The assay results are used primarily for Transuranic (TRU) / Low Level Waste (LLW) sorting with many of the waste items having been disposed of at NTS.

Pajarito Scientific Corporation (PSC) provided a complete portable NDA service for Paducah Remediation Services and EnergySolutions at the Paducah Gaseous Diffusion Plant in Kentucky between 2008 and 2009. The service included the provision of hardware, procedures, operators and physicists in support of a Legacy Waste Disposition Project.

The scope of work comprised characterizing drums stored across the plant containing items as basic as PPE (personal protective equipment) to higher activity materials such as alumina trap mix and magnesium fluoride pellets. In total, PSC characterized over 1000 drums and a few miscellaneous smaller items. While the majority of the drums contained ‘normal’ uranium, the waste also included recycled uranium with transuranics and fission products.

The raw gamma data was analyzed thoroughly post measurement and validated results were delivered to the customer. This analysis and validation was performed remotely by a core group of highly qualified NDA professionals that meet the ASTM C 1490-01 standard.

PSC played a major role in supporting the contractors so they could meet the September 2009 deadline of completely characterizing the legacy waste as part of their Agreed Order with the Commonwealth of Kentucky.

Paducah is a similar site to Portsmouth in terms of the waste streams and radionuclides expected to be encountered. PSC provided NDA support services to EnergySolutions and received an email of thanks upon completion of the contract from the EnergySolutions Project Manager. An excerpt is shown here; the complete email is available on request.

…..“So, thank you for your professionalism, your team’s personal sacrifices for the project, and for playing a large part in EnergySolutions being able to make the claim that all Legacy Waste in Paducah is going to be characterized by the end of FY ’09. I want you both to know that I would definitely contract with PSC again in the future and I will confidently recommend you when receiving other inquiries regarding NDA/NDE”.